In some ways it’s not a huge milestone. We work with around 35 main clients every year, and through them we reach about 1000 other organisations. And the total only takes into account the work we’ve done since incorporating as a company in 2013, not the years since 2006 when I was building up the business as a freelance.

In other ways though, it’s a very proud achievement. It’s the result of exceptionally hard work, not just by me but by all five of us now involved in the core team. Not to mention our freelance and other partners who understand and  contribute to our ethos through illustration (John Miers) transcription (CVB Transcribing), film making (Helena Ohman @ Rare Bird), printing (Glasgow Creative) and web services (Hot Igloo).

So it’s an important milestone that reflects the value of relationships. Which is fitting because when W&G became a full-time enterprise Relationship Marketing wasn’t just the plank of my own strategy, it was a core part of my training offer. At the time, I felt pretty much a lone voice speaking about the suitability of this approach for non-profit organisations. But as we continue to develop our approach to organisational sustainability and draw on the research evidence base, it’s becoming clear that we really were onto something all those years ago. Relationship Marketing is not just the forgotten theory behind CRM systems, the evidence shows that it’s a highly appropriate model for non-profit sustainability. It’s still central to our approach to income generation (our own and our clients’).

It’s also fitting that our 100th client was Relationships Scotland, an organisation and network committed to improving relationships in couples, families, and communities. Running a Lasting Difference session at their AGM in October was a real privilege, worthy of the celebratory cake! 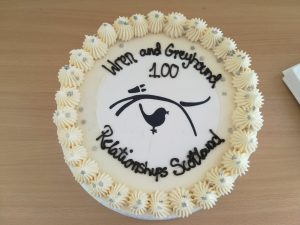 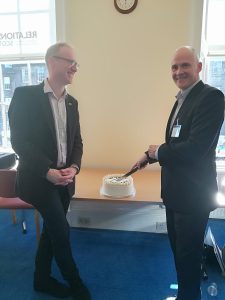 So on our fifth birthday and 100th ‘anniversary’ I’d like to thank  everyone:

On reflection, it’s a huge milestone we’re celebrating. A point in time where we set ourselves a new vision, new goals. Where we allow ourselves to reflect for a moment before pushing ever onward.